Re-established in April 2017, Alliance of Former Muslims (Ireland) is a not-for-profit organisation providing assistance to those who have renounced Islam. The Alliance acts as both a support group and social network for ex-Muslims living in Ireland, empowering those who feel pressured by friends and/or relatives to keep their apostasy a secret.

The Alliance holds the importance of its mission to be self-evident: for in a true democracy, no one should have to conceal their beliefs. Those who escape the fanaticism of the Islamic world to avail of civil liberties should not have to fear reprisal by those same fanatics in the West. The Constitution of Ireland guarantees freedom of expression to all Irish citizens, be they religious or secular (Article 40.6.1). Ensuring the implementation of this article is vital, if we are to avoid regressing to the Dark Ages of dogma and witch-hunts. Recognising that the price of liberty is eternal vigilance, we stand on guard against any attempts to subvert democracy, be it those of the Regressive Left or their friends on the Islamic far-Right. We give no quarter to Wahhabi-Salafi sympathisers disguised as ‘anti-fascists’, who would sooner accuse us of being Israeli agents than speak critically of our Muslim oppressors.

The Alliance completely rejects the charge of ‘Islamophobia’ – an Orwellian term designed to render Islam immune from criticism, by implying that any such criticism must ipso facto be phobic. Indeed, a passive observer of Islam in Ireland will detect a climate of intellectual fascism on the subject: witness the abhorrent treatment of Maryam Namazie by Trinity College Dublin in February 2015, who was not permitted to speak freely on the rights of apostates by the college management, owing to pressure from the Muslim Student Association. Contrast this with the freedom awarded to Kamal El-Mekki, known for his defence of the death penalty for atheists and homosexuals, who was allowed to speak earlier in the month without any such restrictions. Thus we see how the Islamist movement has led academic institutions to protect ‘Muslim sensitivities’ at the expense of free speech.

Institutions like the Islamic Cultural Centre of Ireland (ICCI) employ the charge of Islamophobia to divert attention from their creeping extremist agenda, one which has led Ireland to become a major logistics base for the Muslim Brotherhood. The ICCI answers directly to Yusuf al-Qaradawi, known for praising Adolf Hitler and the Holocaust as blessings from God. Ali Selim, spokesman for the ICCI, has refused to condemn Osama bin Laden or even acknowledge that the 7/7 bombings were carried out by Muslims. Both the ICCI and the Dublin Mosque have often been host to jihadist preachers – including Wajdi Ghunaim, who advocates suicide attacks against Jews. They have also employed suspected terrorists as religious teachers, e.g. Abdul-Rahman Katrani, who is wanted by the Government of Morocco for his involvement in the 2003 Casablanca bombings, which killed 45 innocent people.

The Alliance sees no colonialism or racism in criticising religious precepts which are of obvious detriment to human well-being. On the contrary, racism is the suggestion that people from Muslim backgrounds are so intellectually deficient that we must be sheltered from all criticism; that we are so incapable of understanding concepts such as human rights, secularism and democracy that we must be given our own courts, whereby the most vulnerable in our midst – women, mainly – are summarily punished by self-imposed ‘community leaders’, with liberal politicians turning a blind eye in the name of multiculturalism. We thus reject shari’a law and state-sanctioned religion in all their forms, and oppose all penalties for blasphemy and apostasy, in accordance with Article 18 of the Universal Declaration of Human Rights.

The Alliance opposes the indoctrination of children and young adults by Wahhabi-Salafi mosques and faith schools, which teach that the world is divided between the House of Islam (Dar al-Islam) and the House of War (Dar al-Harb) – and hence, that non-Muslims must either live in perpetual subjugation or be killed for their disbelief. We insist that sexual and ethnic minorities are protected from persecution and violence, and, understanding that Muslims are the first victims of Islam, extend this demand to all liberal believers and minority sects within the faith – including Ahmadiyya Muslims, who suffer regular intimidation and violence from Wahhabi-Salafi fanatics on the ground: witness the murder of shopkeeper Asad Shah in Glasgow, whose only crime was to hold a broader view of Prophethood as a concept.

The Alliance affirms the values of rationalism and humanism as universally applicable, given that we are all members of the same species, with the same fundamental capacity for reason and empathy. Echoing the spirit of classical anti-colonial thinkers such as C.L.R. James and Frantz Fanon, we recognise imperialism not as a Western ideology, but as an obstacle to the pursuit of the progressive ideals that arose out of the Enlightenment. We enjoin academics and thinkers everywhere to embark on a fearless examination of the origins and sources of Islam, and to promulgate the ideals of scientific and historical inquiry without apology. We affirm the essential message of the St. Petersburg Declaration, i.e. that before any of us is a member of the Umma, the Body of Christ or the Chosen People, we are all members of the community of conscience, with a responsibility to nurture this world for future generations to enjoy. 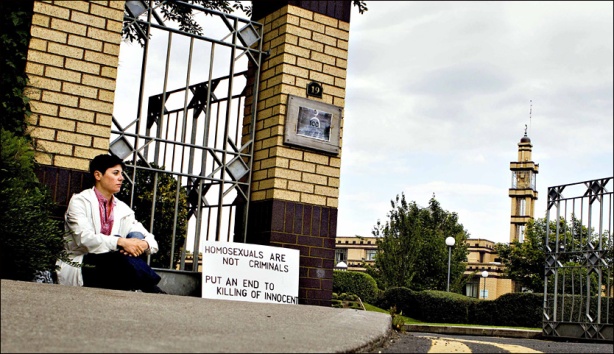 A lone woman protests against the killing of homosexuals under Islamic law. This practice is endorsed wholeheartedly by the Clonskeagh Mosque.